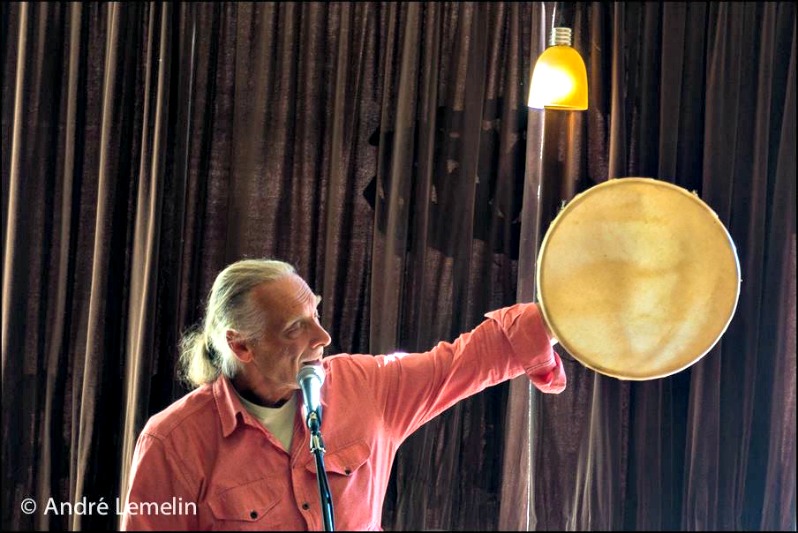 Back in 1999, while discovering Québec, Canada, we visited a place called Dao8eoli Tsonontwan, near Québec city, managed by Regent Sioui, a Huron elder of the Bear clan.

By coincidence (or not?) Robert Seven Crows came to visit while we were there.

Robert was magic. He was a storyteller, a former Canadian Airlines pilot, defender of aboriginal rights, a great singer, and an extremely nice person. We were listening to everything he had to say and watching him walking his talk.

Little did we know (little did he know) our moments with Robert and Régent were a kind of starting point for future adventures, expeditions and stays with the First Nations and the creation of rewilding drum many years later.

I still remember Robert brought a basket with him woven with beautiful designs of 7 Crows. I still had lots to learn at that time. Later I found out that it was the typical native birch bark basket, probably made by Atikamekw people whom I would visit years later.

Years later, Robert came over to the Belgian Ardennes for a storytelling festival, where we met him and his wife briefly in between stage acts.

I would love to see Robert travel to Europe more to share his stories and wisdoms over here! In the meantime you can listen to him here or here.

We are very grateful to Robert for his involvement in this section of our blog. We leave you now with his valuable contribution.

Robert Seven Crows’ Wild Side and the Eight Steps to Rewilding

Look for food in its purest and most natural and unprocessed state. Forget about wrapped and labelled food, and go local and seasonal. Be reasonable when it comes to portions, and cherish the food and the company. Don’t forget about the water, look for a closeby spring.

Robert: Joan Pawnee, my wife and I are still, what you would consider, traditional hunter/ gatherers. Pawnee is a traditional herbalist and we hunt, trap, fish and gather wild edibles.

We have a garden that is very generous and almost the only red meat we eat is the meat we bring home; deer and beaver.

In front of the house we have the Wabozsipi River (La Lièvre), in which we fish, bass, walleye, and pike. Behind we have the forest. This area is called “Des Ruisseaux,” which means “the springs,” so our well water is clear and pure.

Reintroduce those movements that are characteristic to the human body. Walk, run, and sprint (barefoot when you can), jump, balance, move on all four, lift heavy weights, swim. Try to sit as little as possible.

Robert: As I am getting on in age, my hunter/gatherer movements are not as fluid as they once were however I can get from A to B. Continuing to move is the key, because if I don’t move, I’ll seize up like an old engine.

It’s funny, but being slower with my movements have given me the chance to study my movements and to realize that, in the forest, we waste much energy by moving too much.

Sleep with the beat of the circadian rhythm whenever possible. Wake up at dawn; slowdown in the evening. Put out the lights, start disconnecting all the electronic devices, and avoid sleeping surrounded by them. Your sleeping place should inspire you to relax and promote sleep.

We live in a straw-bale-insulated house, so it is very quiet. We don’t have any heating on the second floor so our room is always cool at night. which allows for good sleeping conditions. With the windows open, last night we were rocked to sleep by the sounds of the geese landing on the sand dune in the river on their way south.

When I get a chance, I sleep a half hour after lunch, just because I can permit myself to do it.

Leave stress behind and dedicate enough time to relax (this does not include watching TV or playing PlayStation). Spend time reading, do a light physical workout, meet up with friends, or enjoy nature instead. Don’t forget to play (with your kids when possible). And last but not least, humour is a great way of relaxing.

Robert: We have five children, all grown up and gone, and nine grandchildren. We often kidnap a few of the grandchildren for a week or so, and take them on canoe expeditions, fishing or out in the bush. We are aboriginal, and laughter is a cultural trait, we love to laugh.

We have few friends but the ones that we do have, we see once in a while. Pawnee and I spend all our time together, so there is no real need for more company.

Refuse to be bombarded by all kinds of electronic devices surrounding you. Reduce your time watching TV, and take off your watch. Make time to disconnect and don’t give in to the many possible excuses. Once disconnected, make time to reconnect with your wilder self and listen to your inner voice. Start to really know yourself. Discover what your real desires and goals in life are. Find out what your mission is on this planet.

Robert: We do have internet and TV by satellite. I must admit that I check Facebook every day because I can stay in touch with the music and Native world.

I stay current with the news, so that we can discuss and reflect on our world. We believe that we must take a stand in our thoughts and our actions for the future of our grandchildren.

Spend as much time as possible outdoors.

Robert: Well I wouldn’t consider the phrase “going outdoors” because we are outdoors. Being inside is odd for us.

Stop thinking that all that surrounds you is evident and logical. Start listening again to the singing of the birds. Try to learn and recognize the different species. Learn about the plants and trees in your area. Observe animals and learn from them. Find out your totem animal is, the animal which inspires you, gives you strength, and teaches you things. Don’t forget to observe other people to better understand your own thoughts and feelings. What you see in them, you see in yourself.

Robert: I observe a lot, being a hunter/trapper. Observation is key to understanding and respecting the animals. Observing that a deer is pregnant or that she is carrying milk for a young one can offer me the gift of leaving her to do her job or observing a big buck that is the alpha male and deciding that he is necessary to the well-being of the future of the deer in our forest. Being a traditional hunter/gatherer, I must ensure the health of our forest and animals so that our grandchildren will be able to enjoy the Creator’s bounty.

Observing nature is the key to humility.

Observing humanity is the best reality show you can subscribe to. It is a natural way of life for me to observe what is going on around me.

I love going into the city every once in a while to work because it gives me the chance to stay sharp.

Returning to our natural state requires relearning a minimum of technical bushcraft and survival skills in order to be able to really enjoy more time in nature in the most comfortable way. The ancestral techniques of bushcraft and survival are meant to cover the basic needs such as food, water, and shelter. Even more important, they teach you the difference between the essential and the superficial.

Robert: What people call bushcraft or survival techniques are simply our way of life. I’ve never thought that building a wigwam or a lean-to as anything other than shelter for the occasion.

The forest and the river are a way of live. They have a rhythm and a breath that we must learn in order to know them and respect them. Just being with them is a ceremony of healing. They teach us what we should know by simply being who they are.

Thank you so much Robert for your time and for sharing with the rewilding drum tribe your wild side.

And you? You want to share your rewilding ways? We are waiting for them in the comments.

Robert Seven Crows Bourdon is of mixed Acadian and Mi’kmag blood. He is a singer/songwriter and traditional storyteller. With his wife, Joan Pawnee Parent, he works at La Macaza federal institution with First Nations men, and they are part of the government of Canada’s “Kumik Elder’s lodge.” They have travelled on four continents to music and storytelling festivals. They live along the Wabozsipi River, three hours north of Montreal, Quebec, and have kilometre of forest behind their house.